A defective cut off wheel?

I was cutting off a piece of 1" dia mild steel round stock using the Proxxon Mitre saw to make a straight shank flycutter. It was a painfully long process as I didn't want to push the mitre saw too hard, especially after burning the bandsaw motor.
Almost 3/4 way through, I saw that the cutting disc is rather worn and will unlikely cut through the 1" stock. A new disc was swapped in. After only a few second of using the new disc, the mitre started making some strange noise. I quickly unplug it and saw the disc wobbling to a stop. This was what I saw when I removed the guard: 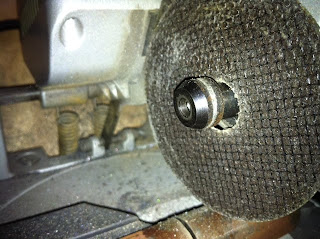 Seems that the new disc centre hole has given way. The old disc was swapped in to cut till it's max and the rest was finished off with the bandsaw.

Looks like the purchase of a horizontal bandsaw can now be justified... I'm just weak in my mind, to the temptation.
Posted by Wongster at 1:16 PM