Hahahahaha... a happy day!  Any trip to Mike's shop at Fook Hai Building is like an excursion during my childhood days.

I went there today during my lunch around 2pm to pick up those Sherline stuff I ordered (boring bars with inserts, highspeed pulley, and some T6061 aluminium stocks).  Ended up also picking up the ER16 spindle, which I've comtemplating to buy.  You see, I've a set of metric and imperial ER16 collets which I'm using with the MT1 holder.  Was warned by many about having the tool extended too far out of the spindle resulting in flex during cut as well as run-out created by stacking.  Maybe it is just excuses I'm using to justify my purchase.  Anyhow, I bought it.  I've also wanted the ER16 setup for ease of swapping tools.  The only few things I've that can't be used on the ER16 are the chucks and the flycutters.  I'll find a solution for these shortly.

Some pics of the stuff:

﻿ ﻿ While I'm in Mike's shop, I picked up the thrust collars, mounting screws, and leadscrews sleeves from him.  After upgrading my mill with parts from A2ZCNC, I've almost everything to make up another mill (5410).  The only thing I am short of are the thrust collars set and the saddle for the z axis column.  I would probably need a spacer, which one was ordered from A2ZCNC through Mike.  I'm so glad that Mike has decided to carry A2Z stuff.  I'm interested in their milling clamps but couldn't bear to dish out the money due to their price.  But I'm sure they'll find their way into my tool drawers somehow...

Today, I've also made a new friend.  Terence bought his mill from Mike less than a month back.  He is into electronics and had milled a PCB using his new machine.  We've so far gathered 4 guys locally who are into the same hobby and will be planning for our 1st meetup at Kelantan Lane for Laksa and TCSS after the lunar new year.  Really looking forward to the meetup.
Posted by Wongster at 11:37 PM No comments:

I'm supposed to be busy today, but I'm not.  Most of the preparation work for the reunion dinner earlier tonight was done by my mother-in-law and the helper.  I spent a few hours in the shop trying to tram the mill after the incident the night before.

It was tough this time.  Couldn't seem to get the tilt right for both front/back and left/right.  Just don't understand why it was so difficult this time round.  After struggling for quite a while, I've the front and back giving me almost the same reading (< 0.01mm off).  Left and right tilt is still off.

I thought of the tramming tool made by John (bogstandard) and would like to make one myself.  I would like to keep it very simple, given my current level of skill (or lack of).  I've 2 digital dial indicators bought last year from CTC Tools right after reading John's thread on MadModder.net.  Some measurements of the DDI were taken.  I initially thought of using simple geometries to represent them to work out the dimensions of the holder which I'll be making but 3D Content Central came to the rescue.  They've a 3D model of a Mitutoyo DDI that is pretty close in dimensions as mine!

After tweaking the downloaded model and added the mounting plate, I completed the simple model of the fixture: 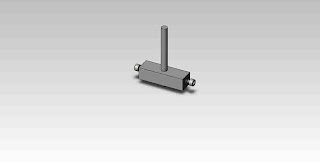 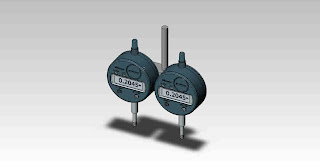 I've to keep the DDIs close together as the width of my table is only 70mm.  The distant between the centre point of the tips is 65mm.

By looking at the title, you will know that I didn't finish the job.  It looks a simple part to make but still, I didn't make it.  There was an accident as I screwed up.  I'll show the pics towards the end.  The loud sound really scare the hell out of me... Mmmm... come to think about it, it is not a bad thing that the hell is out of me.... lame...

Ok, back to business.  After facing the aluminum piece and squaring it off in my previous session, I painted the top face red with a marker and layout the 4 holes to be drilled.  2 will be tapped M4 and the other 2 will be made into a slot with counterbore for the original sherline screws to be mounted at the end of the z column.

I originally planned to use a set of the holes to hold the stock down for profiling.  But given the size of the job and the holes pretty near the cut line with the capscrew head in the way, I decided to fasten the stock onto a pair of 123 block.

I hope I didn't wake anyone up with the loud noise.  I hit the e-stop pretty quickly.  Else the 1/2" endmill would have hit the clamp.  I must have done something wrong with either my setup or the approach.  I'll think about that for while before commencing work.  Looks like I'll be spending some time tomorrow to inspect the mill for damages and re-tram the machine.

On a lighter note, Mike (SG Tooling) sent me a pic of a leaf he milled onto a piece of pine.  He was demo'ing Vectric Cut3D and took the sample to this mill.  Nice stuff.

Ok.  1.12am now.  Should be working till maybe 3am but have no mood after the incident.  I'll retire to bed and start again tomorrow.
Posted by Wongster at 1:13 AM 2 comments:

It was Christmas night.  All silent and peaceful except the sound of the Proxxon MBS 240/E Bandsaw doing its work, cutting across a piece of aluminium 25mm thick.  It was a cut that I've been accustomed to making on the little machine since its acquisition when I smell something burning.  It started rather faint which I thought was the dye which was used to layout the cut lines reacting to the heat.  Smoke started when the smell got stronger.  The bandsaw came to a halt...

The bandsaw was dead...

I thought initially that it was time for me to start shopping for a new one.  Went around my favorite shopping district - Kelantan Lane to see what's available.  2 was found which would serve my needs for now.  Both Taiwanese and one cheaper by 1/2.  Both are much bigger than the little Proxxon and weigh a few times more.

The SGD400+ horizontal bandsaw is rather basic; fully manual except, of course, the movement of the blade.  Not very satisfied with what I saw, I went on my search.

At Hup Hong in Jalan Besar Plaza, I saw what I need which can still fit into my little study converted shop; the Waytrain UE-100S.  It features a automatic cut off at end of the job and auto-feed which is controllable.  Spotting a slightly bigger frame, it can be converted to a vertical bandsaw but with a tiny table.  The only thing that stop me from grabbing it on the spot is its price tag of SGD782 before tax; a little on the high side especially after going over budget for the month on the precision leadscrew conversion of the mill and the trips the family made.  Further, my beautiful wife wasn't impress with the price tag.

The last resort was to call in my buddy, Mike Kong of SG Tooling.  He is the local distributor of Sherline and Proxxon stuff.  Being an electrical engineer by training, he assured me that the bandsaw can be salvaged.  He did and delivered what was promised.

I heard from him a day after the New Year celebration.  He said that the motor has burnt.  Replacing the motor will get the bandsaw going again.  I picked up the bandsaw yesterday at his shop.  He was telling me that the blade I was using was blunt to a point where its not even cutting his fingers; I've worked the less than 1 year old bandsaw to death by pushing it beyond its limit on a blunt blade...

Next, he took out the burnt motor and opened it up.  Burnt smell filled the shop immediate.  I have not seen the internal of a working motor before but I can see that it was rather bad.

Some pics of the motor: 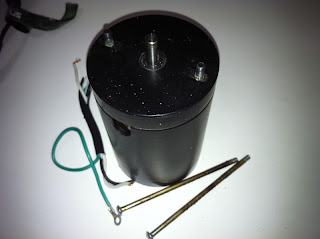 Anyone out there know if I can make this motor to work again?  I can see if I can use it on some projects if it can be revived.

Anyway, I've a working bandsaw now.  Just cut a piece of wood to make a sacrifical board to continue my work on the leadscrew mod.
Posted by Wongster at 8:09 AM 2 comments:

Happy 2011!!!  I'm happy indeed as I get to spend around 4 to 5 hours in the shop, not mentioning the 2 to 3 hours yesterday night!  In fact, I just cleaned up the shop and decided to work on this post before I retire for the day.

Some update on this mod.  Finally managed to complete the Antibacklash Nut Mount and will be starting on the Motor Mount.

﻿
﻿
As I still have some time left, I started preparing the stock for the motor mount.  The motor mount given to me free of charge by Tim of A2Z cannot be used as it didn't offset the stepper motor enough to use the nut mount with the bigger leadscrew.

2 options were available to me at this stage; I can either follow what Graham shown  on his pics by working on a piece of round stock in the lathe or to use CNC to profile out the part.  I went for the latter as I do not have aluminium round stock of 65mm diameter.  What I have on hand is a piece of 100mm x 160mm x 13mm aluminium rectangular stock.  Once the decison was made, I took out the hacksaw and started cutting out the stock.  Would have used my bandsaw if not for the blown motor (or controller).  Mike of SG Tooling is kind enough to volunteer to see if he can fix it.  I'm counting on him for that but, on the other hand, was hoping he can't fix it... why? because I saw a Taiwan bandsaw (Waytrain UE100S) which I like.  This little machine (in fact, it is bigger than all the stuff I have in my shop) can be used vertically and horizontally.  It comes with auto-feed and auto power off, features that make cutting up stocks to required size easier.  But it is going to cost me SGD837 including tax to bring it home.  Maybe I should just postpone this purchase and pray that Mike can fix the Proxxon bandsaw.

This is how the Stepper Motor Mount will look like:

I'll find some time to finish up the conversion as soon as I can.  Got to shift my focus back to my day job since holiday is over.
Posted by Wongster at 12:00 AM No comments: