Ok, as I've promised, I'm back in machining related posts from this post on. I've started on my very first engine, the simplest one I can find with the least parts - Millie. The Sherline distributor here, Mike of SG Tooling, gave me the kit many months ago but I've not the time to start building it.

I spent some bit of time on Saturday figuring out how to best convert the plan to metric. The rounding up and down of the dimensions are tricky; I need to make sure that mating parts still fit and work together after the conversion & rounding off. At the end, I decided to adjust as I move along.

I've the lathe just trammed and so decided to do the round parts first. I may even bore the piston hole on the brass cylinder on the lathe, if I feel I'm up to task later. 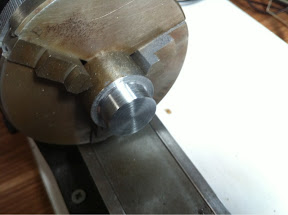 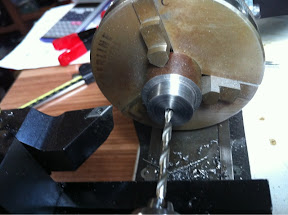 The crankshaft of 12L14 steel supplied was inserted into the drilled hole to test fit. The fit was a little loose. A little loctite will be used to keep it in place. 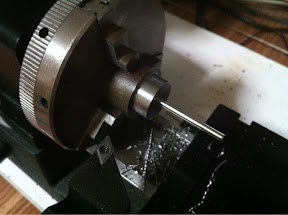 Before parting off, the recess has to be machined on the face. I wasn't sure how I should do this and so put my question on the groups after cleaning up. I was on the bed when I received replies to my post. Both Mr Kieffer & Mr Glickstein suggested using boring bar for the job. Why didn't I think of that?! I jumped off my bed and headed for the shop. My first attempt ended in failure. 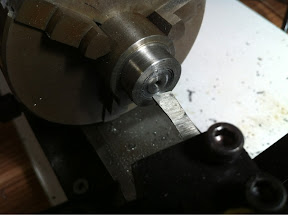 I went back to bed as it was late, though still trying to think of a solution before falling asleep. Then, I remembered that I ever bought a grooving tool insert. That should be the right tool to use for this job. But it's too late to do anything; I was already too tired.

This morning I got up to complete the job. 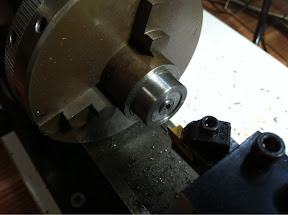 The recess on one side is now done. Time to part it off. 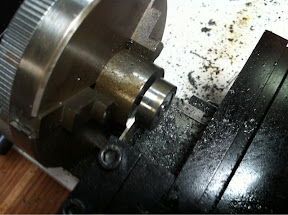 Comparing with parting off aluminum rods, this was much easier and quick. Maybe because of the little experiences I gained, the operation went smoothly without a glitch. 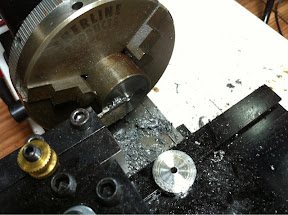 I re-chuck the flywheel to work on the other side. In my excitement, I forgot to face it to the thickness according to plan. This, I don't think is critical. I align the flywheel in the 3 jaw by tapping on the face while the spindle turns. Didn't want to pull out the DTI as my shop time was running out. 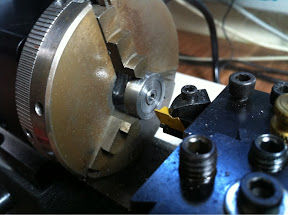 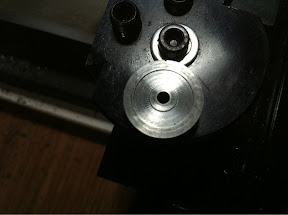 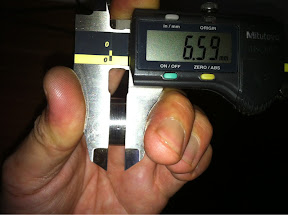 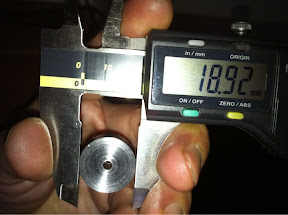 I'm going leave this flywheel as it is. Will decide if I need to make another one after I have the rest of the parts done. May even drill holes around the face to represent spokes of some sort.

Let's see when I've time in the shop this coming week to continue this project.

Have a blessed week.

Posted by Wongster at 8:26 PM No comments:

It is finally ending with 1 more working day on Monday. It has been a crazy month. First with my dad's health and second, with me covering my buddy who went for his holiday in Europe.

Dad is recovering well. He had his last ops last week and was discharged on Tuesday. He is still feeling a little weak but I believe God will nurse him back to health. This old man of mine is tough!

My buddy will be back in the country on Sunday. Hope he'll be back in office on Monday though I don't think that's likely; some adjustments may be needed due to jet-lag. Then, it'll be the adjustment from holiday mode to work mode; kind of tough especially towards the end of the year.

I was passing through Mike's shop 2 days' back. He reported that my order from Proxxon may only arrive after the year ended. I was kind of disappointed to hear that as I was hoping to spend some time in December getting to know the new lathe. I'm praying for miracle...

The little manual mill seems to be pretty well squared up after spending numerous hours over several weeks adjusting it. I want to get started machining the parts for Millie, which looks the simplest engine for beginners like me. I've converted the dimensions from imperial to metric. Some adjustments will still be needed to ensure that mating parts are within tolerance. All this are being done on the notebook using CADCAM software. I really want to start work tomorrow but I'm feeling the strain; the produce of the crazy month.

Alicia's 12th birthday is coming (October 31). I bought her a Nintendo 3DS 2 weeks' ago as her birthday gift. She is asking us to fund her party with her classmates after school on Monday at Swenson. Thought I've already given her what she always wanted? Kids these days...

We'll have Japanese buffer dinner with the family to celebrate her birthday tomorrow. I'm hoping my dad and granny can join us. There'll be 16 of us, 2 families (including my in-laws), getting together chatting away. This will cost me quite a bit, but for the family, it's well worth the money.

This post should mark the end of non-machining topics. My next one will either be on my work making the Millie or continuing with the z axis leadscrew mod for the bigger mill.

Posted by Wongster at 7:49 PM No comments:

This has been a challenging weekend with my dear wife out of the country.  The 2 little ones was recovering from food poisoning and our helper being only a few days old with us.

Alicia, the older girl, recovered well.  Its Ruth that is still having her occasional run to the toilet.  She looks weak and kept having nightmare.  So both of us didn't get much sleep for the last 2 nights.

This week will be a tough one for me with little rest over the weekend.  Most of my days are filled with appointments and rushing of cases.

In fact, this month has been challenging starting with my dad's condition late last month till a good part of this month.

I thank God for His strength to see me through.

Regards,
Wong
Posted by Wongster at 12:36 PM No comments:

Couldn't exactly remember how I got the link to this site but I'm glad I found it.  Mr Bentley's creations are simply beautiful.  I'll be contented if I build to that standard even if I can't get them to run.  But I believe when I'm up to par, the engines built will run...

Here's the link: http://modelengines.info/.  Enjoy!
Posted by Wongster at 11:07 AM No comments:

We were originally told that my dad will have to go through an ops today to route his intestine to his stomach to pass motion so as to keep his wound clean. His doctor told us today that his wound has started drying up so much that the ops is no longer needed!!! They'll be monitoring his wound and will get in a plastic surgeon for skin grafting in about a week's time.

Posted by Wongster at 1:44 PM No comments:

We had a feast late last night, celebrating my dad's recovery. He was enjoying the Lord's shalom and comfort. Pastor Chris came by yesterday. She shared with dad the Good News. We prayed and worshipped the Lord in the ICU, partaking the Holy Communion. Dad slept with peaceful look on his face.

My cousin, a doctor with another hospital, read dad's record and told us that dad's condition is stable, confirming what the Lord has placed in our heart. We're rejecting all bad news in His name, claiming ALL His promises. If His Words is not truth, what else is?

We'll be talking to the doctor later. We believe the tubes that in his mouth, down to his throat, will be remove today. He will be able to eat, talk, and celebrate with us. This will all end in jubilee though it started with us almost losing him. God is faithful. For all He is giving us, He gave freely. It's up to us to claim all the blessings He has already provided. The price was paid in that ONE ACT.