The parcel came as a surprise as I did not expect it to arrive in another week from past experiences dealing with CTC Tools, which is based in Hong Kong.


In the box, I've the inside mike and the disc for calibration. From right: the ER32 collet chuck with 3MT shank, the 3MT to 2MT reduction sleeve (3MT to 1MT not shown in pic), the wrench for the collet chuck, and the metric mike head which I plan to use as a lathe stop.

The reduction sleeve is for my current project - the Set-Over Centre.  The arbor on the Set-Over Centre is 2MT, meant for the tailstock of the Proxxon.  To turn and thread the business end of the arbor, I need to have a way to put it into the 3MT bore of the spindle.  Chuck suggested in the MadModder forum that I look at the 3MT to 2MT reduction sleeve to hole the arbor which is the reason for this purchase.  The sleeve can also be used to test fit a 2MT taper if I make one with the Set-Over Centre.  The 3MT to 1MT sleeve was picked up along the way to save on shipping in case I want to make something for the Sherline spindle in the future.

I'm expecting the VistaCNC Pendant to be delivered anytime tomorrow or the day after. From online tracking, it reached our shore today and was shown as departing from the Airport Processing Centre.

A preview of how it look with the protective boot which I also ordered. 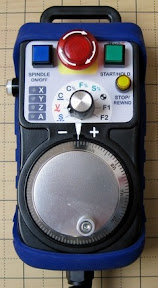 This thing looks more fun than the Xbox360 controller I'm currently using. Let's hope it is, as it is more than 4 times the price with shopping and GST included.

- Posted using BlogPress from my iPhone
Posted by Wongster at 10:58 PM