I was given the weekend off due to my bad lower back (thanks boss!). It is still giving me a bit of problem being rather stiff and the occasional pull but I'm determined to do some work in the shop.

Some thoughts ran through my mind about achieving a uniform diameter throughout the entire 55mm length of the axle I'm doing for Dennis' landing gear. The flex in the tool was eliminated with the purchase of the HSS insert tool for parting & grooving from AR Warner thru LMS. But I couldn't figure out how to eliminate or at least minimize flex in the stainless steel pin, especially when it gets closer to the required diameter of 4mm.

Jerry Kieffer of Sherline group suggested turning by breaking the 55mm length into shorter sections till the entire length is out of the collet. He also warned of having to have accurate collet for this to work.

I spent Saturday afternoon aligning the spindle centre line to the bed and testing out what Jerry had suggested. It turned out well for the first 2 sections but as more of the stock was sticking out of the collet, I've a small "hump" between the 2nd and 3rd sections. Don't know if it can be seen from the pic. 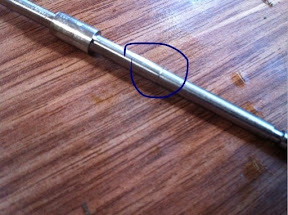 I tested with another piece with the same result. This seems to suggest that I've run-out in the collet. These set of ER16 collets were from CTC Tools. Likely China made as the company is based in Hong Kong and their product ship out from Shenzhen.

So now I've another set of problem to solve... Sigh... I'm using the ER16 as Sherline's MT1 collets with the drawbar doesn't allow the stock to pass through the spindle bore. maybe I should cut the grooves on all the stocks first and either turn it between centers or use the 4-jaw chuck.

I did complete 2 pieces yesterday but I miscounted the dial resulting the 1st one to be a little shorter (by about 3mm) than the required length. Screwed up the other one, my best so far, when cutting the flat, also due to miscounting of the handwheel dial. So, 2 pieces completed with defects... Sigh... I need DRO!!! Mike, when my DRO coming??? 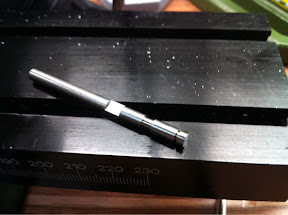 One other thing I can do in the interim; switch off my phone when in the shop. Both boo-boo's where made when I was interrupted by phone calls; one was from my colleague and the other a prospective client.

That's all for this week. Before I go, I posted the pic of my next purchase, probably ordering it by end August. Shipping will take about 8 to 9 weeks (hope I hear that wrong). Don't ask me if I need it, or will be able to make full use of it. I'm just attracted to it's bright colors and my need to de-stress. 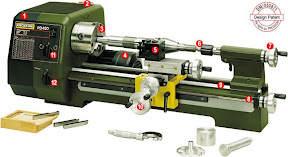