Get to spend some time in the shop tonight.  Started wanting to finish up the "probing stick" for the bro who is a diver with the carabiner hook I bought in between my meetings today.  Some problems which I can't solve at this point shifted my attention to the lathe.

Last Saturday afternoon, I spent some time wiring up the motors on the lathe to connect them to the Soigeneris Stepper Drive (http://www.soigeneris.com/STDR_4C-details.aspx).  Tonight, I was ready to test the now CNC lathe with the chess piece I planned to cut.  Some pics as usual with a couple of videos at the end. 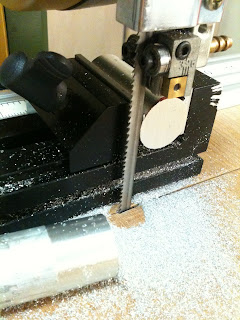 The 25mm round stock being "sliced" off on the bandsaw to roughly square up the ends.  The Sherline vise was use to hold the stock and was guided by a straight edge clamp mounted onto the bandsaw table. 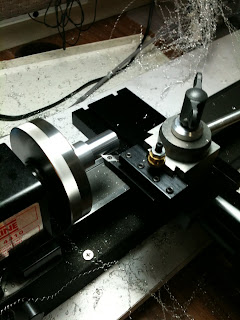 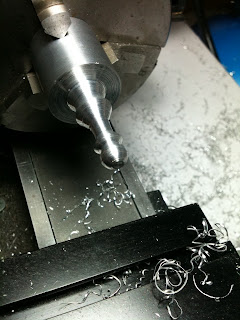 Program completed.  Rather rough as I did not specify the finishing cut during the CAM stage.  Nothing can't be smoothen out with files and sandpapers. 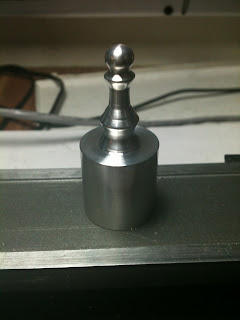 After touching up with files, sandpapers, and brasso...  Nice... 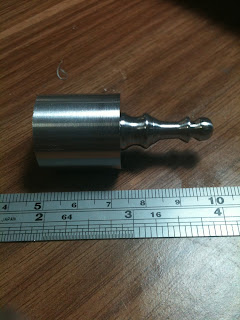 ﻿
I was to cut off the excess stock but changed my mind.  The new plan is to do some engraving on it and dress it up a little more to make it into a base.

Some videos taken during the cut.  Pardon me for the bad quality.  They were all taken using my iPhone with one hand while the other hand was on the e-Stop in case of screw-up.


The rubbing of the back of the tool against the stock wasn't as bad as I first thought.  It was more apparent only towards the end.

I was rather busy removing swarf during the run.  Lots of lots of swarf was produced.  I was so afraid that the long strands may get entangled in the chuck.
I'll be doing a bigger piece with finishing cut the next round.  Maybe a queen for my dear wife.  Of course, more shop time is needed for the many things I would like to make (or rather, attempt to make).