I was looking on the web for any build log on the making of Millie and stumble across this video on YouTube posted by Mike (handle: ChooChooMike).  The little engine sounded rather nice in the video.

I hope that mine will run as well as his when completed.
Posted by Wongster at 1:20 AM No comments:

I'm home alone today. My wife brought the girls out to the Bird Park with her girlfriends and their kids. I was invited but I feel kinda weird to be the only spouse around. Further, I'm attending the bank's Dinner & Dance tonight (for the dinner part. I can't dance...). Beside catching up some sleep, I completed the Cylinder Mount for my first engine.

From this and previous sessions, I found that my mill doesn't seem to move the distant I dialed into. I rely on the layout lines to locate the hole locations most of the time. Will have to check that out soon.

A square piece of brass was included in the kit for this engine running on compressed air. It measures 1/2" square and slightly more than 2" long to make the Cylinder Mount and the Cylinder.

I started by slicing up the brass stock on my bandsaw for the 2 parts freehand.

Next, the flycutter was used to thin the piece for the mount to 3/16", as called out in the plan.

The insert used is from AR Warner made of HSS.

Yet again, I was out by 0.004"... Really need to pay attention to creep up to the right size... I'll move on and rebuild any parts that won't work later.

The 2 sides were trimmed next.

I decided to layout the hole locations rather than relying solely on the handwheels as I seemed not to get the distant dialed.

I should start drilling the holes from the top of the workpiece (the right side in the pix), which is the datum shown in the plan), but the top 2 holes (the 1/16" holes on each sides of the centerline). I wasn't confident in remembering how many turns I made and therefore started with those 2 on the centerline.

Holes all done. The 3 smaller holes to the right are right on the marks but not the 1/8" hole.

The plan calls for the hole in the middle to be counterbored.

I should have done the counterboring in one setup but... it is not very concentric to the through hole. That's the price to pay for not planing forward. Anyway, that's a good lesson learnt.

The 2 inlet ports (is that the name of the holes?) were drilled till each broke into the 1/16" hole on each side.

The last part for this engine is the Cylinder.

This will be done in the next session. The truth will be revealed when I assemble the parts together.

Posted by Wongster at 8:43 PM No comments:

I had a short session this morning making the piston. It was made from the supplied steel pin which I turned to 0.123" instead of 0.125" called for in the plan. I've to learn to be more careful when creeping up to the required dimension. Hope this 2 thou difference will not cause any problem later.

Overshot the required 1/8". Measuring after parting off.

The next operation involving the drilling of the 1/16" hole on the cylinder face. I wanted to try using the rotary table to hold the job in the mill. This is to provide the practice I need in setting up. Didn't follow through with this as I couldn't get the face of the rotary table square to the table of the mill. I'll have to learn to square it up at a later date.

I notice a deep cut on the right angle attachment when removing it from its plastic bag. I would feel better if I caused the cut but it has been in the bag within the box it came in since I bought it. Should have notice it earlier.

I parted off the piston 2 thou longer than the required 0.6875" this time do that I can trim off the excess later (I've been going under too often so far...).

Holding the piston in the vise, I carefully touch off a 6mm steel dowel to find its centre and end. The 1/16" HSS drill was then swapped in and drill away.

It was tricky at first when the drill started wondering. Light stabbing movement was used and the drill managed to find its way through the piston. The hole looks centered on the face of the cylinder.

One thing on the crank disc from the previous instalment surprised me a little; the crank shaft was originally a sliding fit in the centre hole of the crank disc. I left it in for the night after taking photos of the assembly. This morning, I can't remove the shaft from the disc anymore. This shows that the heat generated during machine operation does expand the part a little to allow a much tighter fit. Instead of using Loctite to hold the shaft to the flywheel (which no long can be pushed in), I'll heat up the flywheel a little to fit the shaft.

I believe I've completed the lathe work for this project. Will be starting on the other parts which are mainly done on the mill. I'm think of doing that tonight, after my birthday dinner, if I'm not too tired.

I'm sitting at the showflat opposite Katong Shopping Centre at this moment. Time to shift my mind back to work.

Posted by Wongster at 4:07 PM No comments:

I had a short session in the shop tonight after meetings and dinner with the team at work though reaching home a little late. The crank disc was done. This is a simple part measuring 1/2" in diameter and 1/8" thick. There were 2 holes to be drilled; a 1/8" hole in the middle for the crank shaft and a 1/16" for the little crank pin that will be driven by the piston. The supplied 12L14 steel measured exactly 1/2" in diameter, which is what's called for in the plan. I merely sand off the rust on its surface using sandpaper on the lathe running at slow speed. A #0 center drill was use before drilling the 1/8" diameter hole. 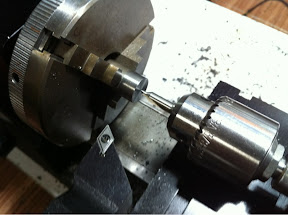 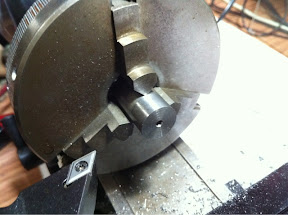 I paused for quite a while thinking how the 1/16" hole should be done. According to the plan, it should be 1/8" away from the center of the disc. I thought of re-chucking the job in a 4 jaw and offset it like the way shown by some folks on YouTube. But I don't have an idea how to offset it by the required 1/8" from center. Since I've the mill squared up, I thought using one of the horizontal axes to do the offset. First, I've to find the center of the job.

This was what I did 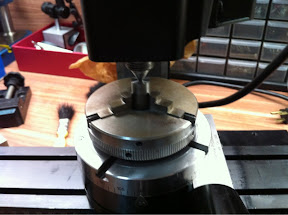 The 1/8" hole that was drilled was aligned with the MT1 center. Once the center was established, I moved the x axis by 3.175mm and drill the 1/16" hole. This is the smallest hole I ever drilled since I started this hobby. I was afraid to break the tiny HSS drill but the operation went without a glitch. 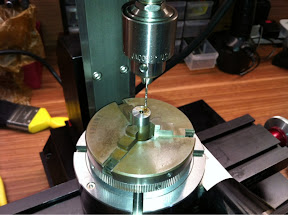 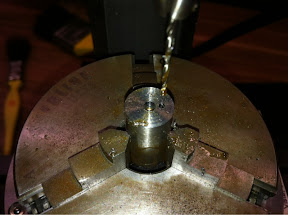 The stock in the chuck was transferred back to the lathe to be parted off. 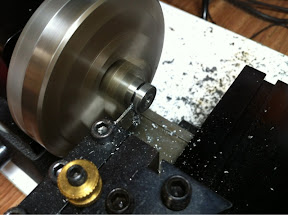 The challenging part was to mount the stock back to the 3 jaw to face the other side till the 1/16" hole show up. This took me quite a while till I decided to hold a engineering square to the face with the motor turning at slow speed. After a few attempts, I managed to get the part turning without visible wobbling.

Facing was done carefully as I only have a little stock sticking out of the chuck.

I stopped with the hole showed up.

Test fit was done with the supplied pin & shaft.

The fit of both are rather tight. I'll still use a drop of Loctite to avoid the parts falling apart.

The completed disc with pin & shaft viewed from another angle.

That's all for today. I'll be making the piston in my next instalment before starting on the rest on the mill.

Posted by Wongster at 1:24 AM No comments: