It has been quite a while since my last post.  I've been rather busy with work to spend time in the shop to do anything meaningful.  But I've been thinking of completing the Z-axis leadscrew modd; should I continue to follow Graham's or his modified design created by Tang Kee.  I've already completed the stepper motor mount and the anti-backlash nut mount following Graham's plan, short of working on the Z-axis saddle to adapt.  If I'm still using the 5410 column, I would not be in this dilemma as the spindle can still be lowered enough to allow endmills to reach the table.  But mine is now a 2010 8-direction column, which is known to not being able to move the spindle down far enough.  And so, I've decided to scrap what I've done and start over.

First thing first, to put Tang Kee's plans into 3D models.  The next task was to model the essential Sherline parts to see how things fit together.  The following is the result:

I'm leaving the 2 raiser plates floating at the moment till the leadscrew model is done.  This allows me to determine the length of the stand-offs so that the stock length of the leadscrew can be used without sawing - a very good idea from Tang Kee.
The nut mount: 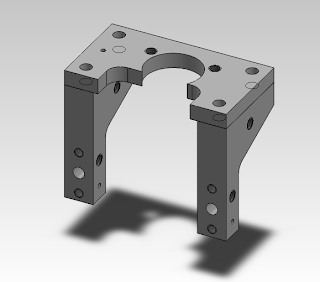 A little on the 3D models.  Tang Kee was so kind to provide what he did using Alibre, which I imported and tried adapting to the software I'm using.  I encountered some problem which I do not have the knowledge to resolve and therefore, created the models from scratch.  The parts were disassembled from the mill and armed with the Mitutoyo Digital Caliper, an 6" steel rule, and a gauge to measure angles.  Some of the dimensions were taken off Tang Kee's models due, again, to my lack of knowledge in measuring some features.
Ok, I'm done with this post.  Hope to have some time to complete the planning stage and move on to the actual machining work.  Stay tune...
Posted by Wongster at 12:16 AM 12 comments: